Archive for the tag “rock carvings”

The Wonders of Madain Saleh (part 1)

Saudi Arabia is home to many beautiful sites, but due to the lack of active tourism (or certainly not enough of it), these areas are generally unknown. Madain Saleh is one of those wondrous places which is a pre-Islamic archeological territory and Saudi Arabia’s first ever World Heritage Site.

Typically Madain Saleh is not easily accessible as permissions from relevant authorities need to be taken before embarking on the journey, but our regular contributor and intrepid traveler Naima Bashir was not to be discouraged. She made the journey with her family, and sent us a detailed report and pictures.

In this first blog post of the series, we’ll bring you her journey from Jeddah to Al Ula, and then on to Madain Saleh. In subsequent posts, Naima will tell us about her visit to the Hijaz Railway, the Castle of Moosa Bin Nusair, Old Al-Ula and the Hill Station.

We had Madain Saleh on our list for a very long time but could not gather the energy for a road trip with small children. But last month, we were determined to give it a try. It is 817 km north of Jeddah, around 8 to 9 hours drive from Jeddah. The journey is a lot easier if you go via Madina and stay the night there.

There is an alternative road through Yanbu, but it’s not very comfortable and safe. So we decided to choose the road through Madina, with our trusty GPS leading the way.

Did you know? Saudi Arabia has 4,000 archeological sites!

On our way we saw camel signs very frequently. This was to alert us to drive carefully, as these splendid animals are likely to walk into the middle of the road.

To reach Madain Saleh we needed to stay in a town called Al Ula, which is situated right next to the site. There are many furnished apartments and hotels available for tourists to stay. Al Ula is a small town and I found it very peaceful. We arrived around 7 p.m. and discovered that it is forbidden to go to the site after or around Maghrib prayer (sunset). We had to wait until the next day to go to Madain Saleh.

Distant view of the tombs carved from the mountains.

The next day we left the hotel and were fascinated to see that the town was all rocks and mountains. We were excited to learn that not only was Al Ula host to the remains of Nebatean era, but also to remains of the mosque where Prophet Mohammad (peace be upon him) stayed for a night before setting out for the historial Battle of Tabuk. In addition, we were told that Moosa Bin Nusair’s Fort, the railway station of the Turkish Empire and remains of old Al Ula could also be visited.

A closer view of the tomb. Initially, we thought it was a house made of bricks and plaster, but this is all carved.

In fact, this piece of land is full of historic places. Just to be clear, the Nabataen remains are of the same people of Thamud who have been mentioned in the Qur’an quite frequently. 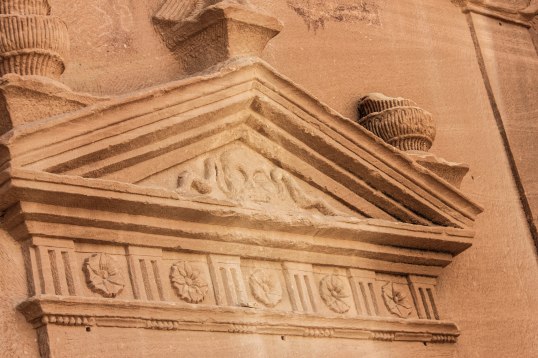 Every tomb had different carvings like flowers, birds and animals on top of the door. This one was decorated with a carved skull.

The World Heritage Site is out of town but easy to reach. I was told that you need to attain some kind of permission, but on arrival, we were told that for some reason we did not any permission for some days. 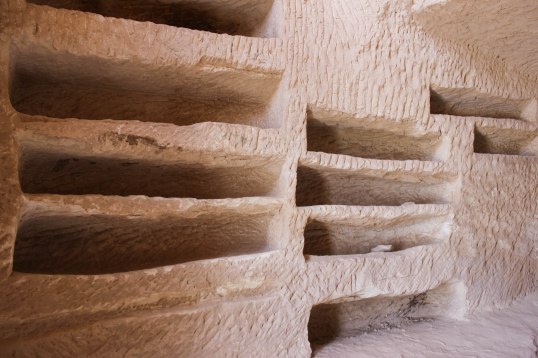 Graves carved inside the tombs.

The Site is a combination of two eras, firstly the Nabateans around 160 BC and secondly the Turkish Empire. The remains of the Hijaz railway station from Turkish Empire that was used for trade and to transport pilgrims from Syria are still there.

Madain Saleh, also known as Al-Hijr, dates back to the Nabataean Civilization and is considered to be one of the most important archaeological sites in Saudi Arabia. It is called The Capital of the Monuments as it contains a huge number of diverse and multifaceted monuments. At first glance, it looks like a vast ground with a huge rock in it, but when you look carefully, those rocks have been carved into shapes of tombs and graves. The levels of these graves vary depending on the level of social and financial status of their owners. People settled in this area due to the suitable climate and the availability of fresh water in the area.

These houses did not have many carvings as they belonged to common citizens.

The monuments surround the residential area and contain 111 monumental tombs, ninety-four of which with decorated facades varying considerably in size. Thirty tombs bear a dated Nabataean inscription incised in a special frame above the door of the funerary vault. They define who was allowed to be buried within the tombs, and indicate the fine to be paid by those who did not obey the rules listed in the text. Inscriptions engraved on rocks, facades of graves and mountains allude to the existence of civilizations that had prevailed and fallen in the area where architecture and sculpture flourished. Every grave facet represents a cemetery for one family.

The Diwan, or the Muslim Council Chamber, is in and around Jabal Ithlib, in the north-eastern part of the archaeological park. Jabal Ithlib is the highest sandstone outcrop of the site and can be seen from as far as al-‘Ula. The internal part of the Jabal may be reached through a narrow passage between high rocks, some 40 m long which can be compared, although much smaller, with the Sîq of Petra. 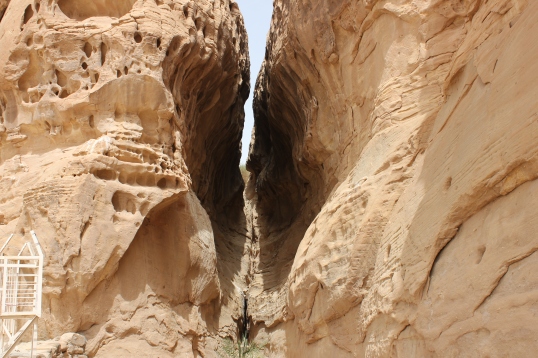 The stream that poured water from the mountains into the well underneath.

At the entrance of this pass, to the right, is carved, the so-called Dîwân room, in fact a  triclinium where groups of people used to have meals together in antiquity. Around Jabal Ithlib, on the outside, are several carved small Nabataean sanctuaries.

Nabatean inscriptions detailing who the tomb was built for.

Most of the niches, altars, betyls (carved sculptures) and other religious monuments are associated with Nabataean inscriptions, sometimes dedications, but most often signatures of the worshippers who came to worship their deity there during the Nabataean period.

A Weekend Getaway to Thuwal Beach

The Mad Traveler Comes to Jeddah