Archive for the tag “Lasani Restaurant”

An Islamic lecture by Arshad Basheer Madani, founder and director of AskIslamPedia.com, followed by Iftar and dinner will be held on the 22nd July, 2014 in Jeddah from 4:30-8pm.

Lessons From Each Surah 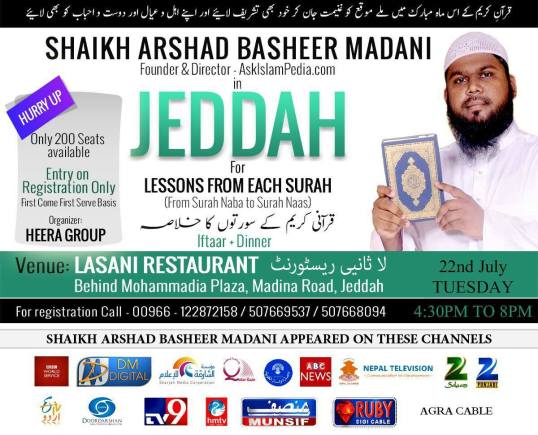 A Tribute to the Father of Urdu

Rohail A. Khan, senior banker and finance director, has been living in Saudi Arabia since 1993 and is developing communities through literature, culture and philanthropy. As chief guest of the memorial service of the Father of Urdu, Rohail Khan reports the success and conclusions of the event for Jeddah Blog.

For the first time in Saudi Arabia, a grand event was organized in the memory of Baba-e-Urdu (Father of Urdu), Dr. Moulvi Abdul Haq, to commemorate his 140th birthday and to propagate his message. Jeddah has rarely witnessed such extraordinary enthusiasm and exemplary love for Urdu.

Baba-e-Urdu (1872-1961) was an acclaimed Urdu educator, writer, critic, linguist, lexicographer, editor, compiler, translator, etymologist, biographer and grammarian. He authored more than 20 books on these areas. Having realized the slow demise of the Persian language, Moulvi Abdul Haq devoted his entire life to making Urdu the primary language of the sub-continent and to placing it head-to-head with English and Arabic. He founded and managed Anjuman Taraqqi-e-Urdu, an organization dedicated to the promotion of Urdu language and literature, for 50 years pre-partition. During his migration in 1947, he carried 15,000 rare Urdu books from Delhi to Karachi. He was the moving spirit behind the establishment of the Osmania University in Hyderabad, Deccan, where Urdu is still one of the mediums of instruction. The world’s largest Urdu Translation Centre was established where rare Urdu books and Deccani manuscripts were translated and published. He was also instrumental in setting up the world’s first Islamia College for Women, Lahore in 1939, and Pakistan’s first Urdu College in Karachi (1949). He was the creator of the world’s largest Urdu-English Dictionary (1930) and in 1959 initiated the grand project of compiling a Modern Urdu Dictionary in 22 volumes. This project was completed three years ago under the Urdu Dictionary Board, Pakistan.

The memorial event was held at Lasani Restaurant on the evening of 21st November, 2012. The successful event had been organized by the Aalmi Urdu Markaz and welcomed more than 275 guests from all walks of life. Men, women and especially youngsters hailing from assorted nationalities all gathered together to commemorate Baba-e-Urdu’s 140th birthday. Multi-cultural community leaders, social workers, businessmen and literary figures added to the light of the event. The audience were treated to a four-hour literary discussions and poetic recitations and warmly applauded the proceedings.

A very diverse audience commemorating the 140th birthday of the Father of Urdu.

The event took off with a short video containing a speech by Baba-e-Urdu and his life story with rare pictures, before the poetry recitals and literary discussions. 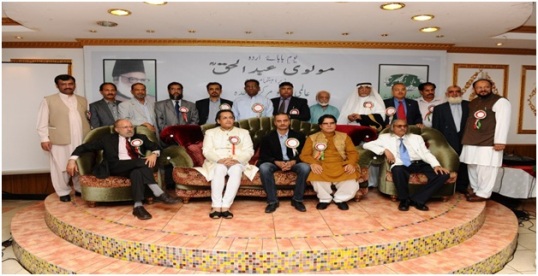 Chief Guest, Rohail Khan, shared his thoughts on Baba-e-Urdu with the organizers and participants, and offered practical suggestions to promote and protect Urdu.

“Architect and saviour of Urdu language and literature, Baba-e-Urdu, Dr. Moulvi Abdul Haq’s lifetime services to protect and promote Urdu are spread over 75 years. He proved a Prophet of Urdu and his message must be adequately propagated for the benefit of current and future generations. Le us not forget that Urdu, 4th largest language, is spoken by over 100 million people across 5 continents.”

The first goal is to launch the cause of making Urdu one of the official languages of Facebook. Rohail Khan can be reached at rohailkhan00@gmail.com and on Facebook.