Archive for the tag “Chess”

The much-awaited Hamleys Toy Store has opened up in the Mall of Arabia. There is a severe dearth of good quality toy stores in Jeddah and we’ve been hoping that this shop will break the mould. Who could be better to review the store than a teenager? Jeddah Blog persuaded fifteen-year old Haris Ali to review Hamleys for us after a recent visit. Read on to find out what this astute teenager thought of the shop, and whether in his opinion, it shaped up to its parent store in London.

A family visit to Mall of Arabia (Mujamma’ Al Arab) today reminded me of a brilliant nostalgia-filled trip to Hamleys Toy Shop of Regent Street, London. Hamleys Jeddah is located on the second floor of the Mall, directly above HyperPanda supermarket, comfortably nestled between Gates 5 and 6. 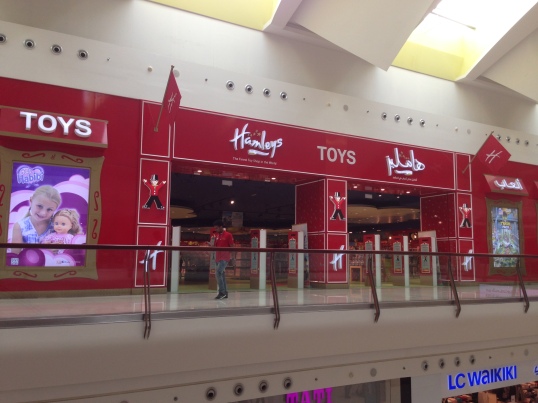 Hamley’s located on the first floor in Mall of Arabia.

As a family including two teenagers and a pre-teen, we were delighted to see the ghost of the world-renowned Hamleys we had visited a couple of years ago in the flesh. The original London store was truly a magnificent toy store unlike any that exists in Jeddah; storey upon storey of toys of excellent quality, interactivity and a sense of excitement for the younger ones.

Hamleys Jeddah, although much smaller in size, spanning maybe four shops in the Mall, has toys for all children; boys and girls alike. Within are Flying UFOs, Magic Blackboards and vintage boardgames like Chess, Chinese Checkers, and Solitaire. There is also a section dedicated to action figures, dolls and laughing Despicable Me’s Minions! 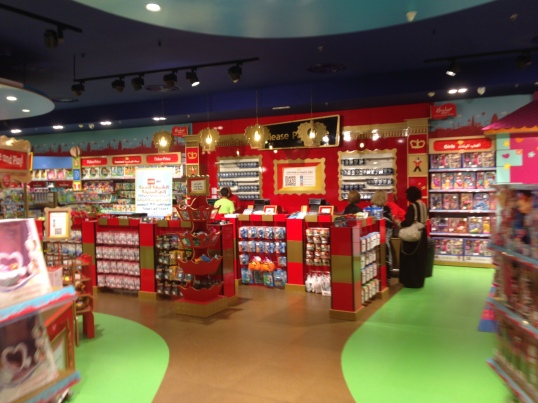 Plenty of variety to choose from.

Official Lego bricks are sold there too, an unusual sight for Jeddah, apparently, as I haven’t found Lego here for over ten years. One of the coolest tech-toys present was the Hex-Bug, a miniature vibrating coloured insect that zooms around its track randomly, a fun toy to watch.

The store stocks toys and board games of all kinds, and not limited only to Hamleys merchandise, but also includes non-branded foam guns, 3D architectural puzzles and a selection of model and remote control cars and helicopters available at other local toy shops too. There are plenty of Barbie supplies and makeup kits for little girls, but they need to increase their variety for older girls. “Hamleys is a good store for younger children, but not for someone my age,” says Suha, my thirteen year old sister. “I like magic stuff, so I would be more interested maybe if they had better magic kits. The only thing I liked was the ripstick.” 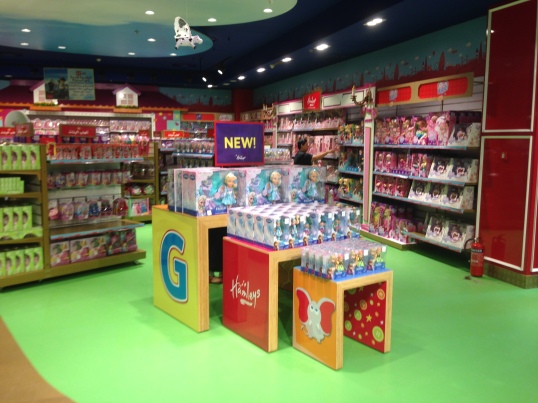 Display tables spread across the store with some of the Hamleys toys laid out on them for the children to give a try are a great idea, and chairs are laid out around a round table for children to play sitting down. 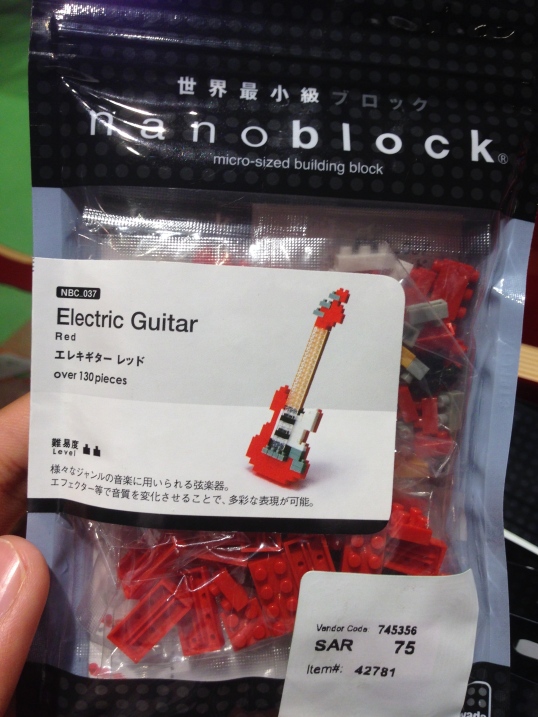 How cute is this? Build your own Lego mini guitar, one of the items available for under SR100.

A fun addition is the track painted onto the floor for kids to whizz around the store on one of Hamleys two wheel skateboards or tricycles. Prices are a little high for most items, but there are lots of pocket-money items children can pick up for SR75 and under. The test to differentiate Hamleys from local toy shops will be in the quality of its products.

All in all, I feel it is a definite improvement on the general standard of toy shops in Jeddah. Even though I would have liked to see many more toys and board games for older children, it is still a great addition to the Mall of Arabia, making us feel one tiny step closer to the World’s Finest Toy Store.