Archive for the tag “Athr Gallery”


Athr Gallery is calling out to young Saudi-based artists between the age of 15 and 30. Follow the link below for details on how to apply. Applications will be assessed by a panel of judges. 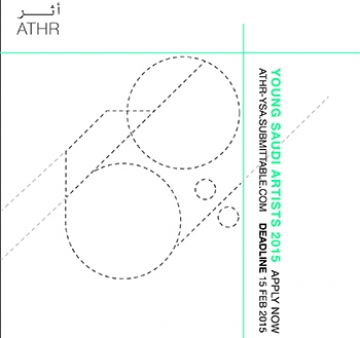 Athr Gallery will be showcasing three solo artists, Faisal Almalki, Sara Abdu and Ramy Alqthami in the beginning of November. Read on for details.

The Language of Human Consciousness

An upcoming exhibition this month by the Athr Gallery in Jeddah will be delivering the largest exhibition in Saudi Arabia on arts inspired by the study of geometry. 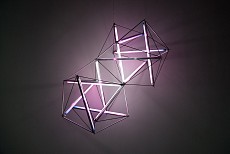 For thousands of years, the question of whether the basics of geometry came naturally to all humans or if they had to be taught; has been explored. According to Plato’s writings, Socrates attempted to determine how well an uneducated slave in a Greek household understood geometry, and eventually concluded that the slave’s soul ‘must have always possessed this knowledge’.

In the midst of startling havoc; humans by this very instinct seek to find order in this chaos, to reason with it; translating it to a language that is perhaps visual and universal is a common field of exploration for scientists and artists alike.

Athr Gallery will deliver a groundbreaking exhibition titled The Language of Human Consciousness in July 2014 and will include work by over 40 artists from around the world. Most of these artists will be exhibiting work for the first time in Saudi Arabia and the Middle East at large. To inaugurate the opening on July 10, Director of TATE Modern London, Chris Dercon will moderate a discussion with pioneering artists in the field.

Athr Gallery has established itself as a leading cultural institution, in which providing a platform for local Saudi artists is at its core. Through this exhibition – in which both local and international artists will be showcased side-by-side – the intended impact and potential benefits are twofold: establish an association between local Saudi artists and leading international artists, and provide an opportunity for the public to experience international culture through a local exhibition.

The Language of Human Consciousness takes geometry as a starting point, accepting its heritage as a symbol of purity, intelligence and perfection and bringing it towards a more contemporary interpretation as a language for exploring the atypical, the imperfect and the alternative. Works are brought together that seek to dissect segments of times, contexts and places and open them up to universal interpretation. The works, in the potency of the contradiction between their infinite possibilities as geometric compositions and the range of their references – social, political, art historical or other – are reduced to a neutral ground: to a human and conceivable form.

The exhibition will examine geometry in a comprehensive exhibition that showcases a multitude of applications in geometry. The dynamic exhibition will include sacred geometry as well as work that unconventionally utilizes geometry, an example of the latter would be the work of Sama Mara, who will present a series titled A Hidden Order, a culmination of several years of collaboration between composer Lee Westwood and artist Sama Mara; where they attempted to interpret music into a visual geometric form. To realise this ambitious exhibition, Athr Gallery has collaborated with over 20 leading galleries around the world – From Lisson Gallery in London to Galleria Continua in San Gimignano and The Third Line in Dubai.

Athr Gallery presents a live calligraphy performance, a calligraphy workshop and a group exhibition this Ramadan.

Jeddah’s Athr Gallery goes to Doha, Qatar this month to collaborate with the city’s Katara Cultural Village on ‘Show Of Faith’, a major, multi-media group exhibition by Saudi Arabian artists opening on July 11th and running until August 31st.

As part of a groundswell of activity from the Saudi Arabian gallery that has seen its artists exhibit in London, Berlin, Venice and Basel in the past few months, ‘Show Of Faith’ marks Athr Gallery’s inaugural foray into the burgeoning art scene of Doha.

Taking its cue from the imminent Ramadan season, a time of contemplation and spiritual regeneration for Muslims worldwide, ‘Show Of Faith’ offers perspectives, insights and reflections on the essence of faith, both within the precepts and traditions of Islam, and beyond, as a universal source of sanctuary and solace.

‘Show Of Faith’ questions how the proximity of Mecca has affected the worldview of the artists who have grown up in the area – artists such as Ibrahim Abumsmar, Nora Alissa, Dana Awartani, Ayman Yossri Daydban, Basmah Felemban,  Musaed Al Hulis, Nasser Al Salem and Noha Al Sharif.

Discussing themes ranging from ritual, tradition and history to the contemporary manifestations of faith and devotion, ‘Show of Faith’ presents a broad spectrum of artistic styles and forms, that draw heavily on the geometrical abstractions of traditional Islamic art, blending smoothly with the present-day approaches and techniques.

– image and text by Athr Gallery

Ammar Al Attar surveys prayer rooms across Jeddah. Mandated in public buildings by national legislation, these informal worship areas are ubiquitous, providing the faithful a place for their five prayers a day regardless of their location.

The viewer experiences the artist’s perspective of these rooms as they are. Nothing is altered or staged, not even the lighting. The authenticity of the depictions allows the series to collectively describe an engagement with a space. This uncontrived honesty towards a subject is characteristic of Al Attar’s oeuvre.

The interiors are often humble, in line with Islamic tenets and in contrast to the region’s exterior architectural opulence. Serenity and stillness are prevalent in these makeshift rooms, elevating their spatial reality as industrial caravans or rooms in malls and business centers, to that of egalitarian spiritual sanctuaries. The prayer rooms mark the passage of time directly through the ever-present, often multiple occurrence of clocks, and more imperceptibly through the awareness of the movement of the sun.

Rituals that take place before entering the rooms are inferred – ablutions and perhaps even a call to prayer. One cannot help but wonder about the individuals in these very different spaces, performing the same rites. This sense of order and togetherness offers a reprieve from the bustling chaos of urban development. Even the demarcated rows in the carpeting are a comfort.

Al Attar chronicles his surroundings and contemporary landscape, going beyond mere documentation, and engaging with issues impacting the social fabric. These empty constructs where people meet are widely scattered evidence of faith, embodying the crossover between public and private space. The locales appear obscure, but upon closer inspection provide a visual history of the artist’s rapidly developing country by presenting a cultural continuity which is rarely visible amidst overwhelming change.

About The Artist
Ammar Al Attar (1981) was born in Dubai and lives and works in Ajman. He carries a Masters in International Business from Dubai’s University of Wollongong, and a Bachelors in Business Information Technology from Dubai’s Higher Colleges of Technology. He has taken part in photography courses, both locally and internationally.

Al Attar’s series of UAE Prayer Rooms was exhibited at the 2013 Sharjah Biennial, entitled “Re:Emerge: Towards A New Cultural Cartography.” He was selected for the 2013 Artist in Residence (A.i.R.) program, a partnership between Art Dubai, London’s Delfina Foundation, the Dubai Culture & Arts Authority and Tashkeel. His work has been shown throughout the UAE, and in the Thessaloniki Museum in Greece. The artist was shortlisted for the International Emerging Artist Award.

Since the 1960s and advancement of technology, video art has taken a prominent route to becoming a fundamental contemporary art medium. With a growing number of international and Arab artists expressing their views, Athr Gallery is proud to present Video(works), a distinctive exhibition in that it celebrates the medium of video art rather than a specific theme or topic.

This exhibition is in collaboration with Hauser & Wirth Gallery, Galleria Continua and Selma Feriani Gallery.

Image courtesy of Athr Gallery and the artist

Coming up at Athr this Saturday. The British Council and Athr Gallery are pleased to invite you to a  lecture on ‘The Historical and Cultural Fascination of Landscape’
By Professor David Rayson, of the Royal Academy in London.
6:00 – 7:30 PM, June 16th, 2012
at Athr Gallery
5th Floor Office Tower, Serafi Mega Mall

Please RSVP info@athrart.com
Out of Britain showcases selected works from the British Council collection by some of the most important landscape artists of the 20th century.

Above image and text reproduced from Athr’s invite and copyrighted to them.